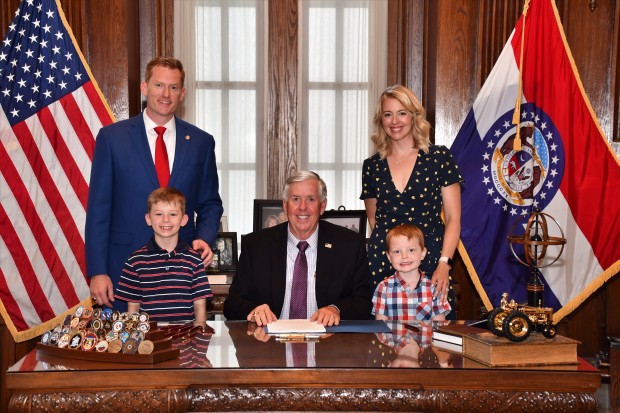 [This article was originally printed in West News Magazine.]

“As a small business owner and caring about the local economy, I was looking to attract businesses and entrepreneurs to come to Missouri,” Grier said in explaining his catalyst for sponsoring the bill.

He said tax credits or reducing tax burdens will incentivize Missouri businesses, but he wanted to find a way that did not cost the government money.

Rep. Derek Grier along with his wife, Ashley, and sons, Jack and Logan, celebrate with Missouri Gov. Mike Parson as HB 2046 is signed into law on July 6. (Source: Derek Grier)
Grier consulted with Arizona Gov. Doug Ducey, whose state was the first to pass a similar occupational licensing reform bill in April 2019. With more comprehensive language, the passing of HB2046 “sets Missouri as the No. 1 reformer in the entire country when it comes to occupational license recognition,” Grier said.

Taking effect on Jan. 1, 2021, the bill has a triad of initiatives, including Licensing Reciprocity, the Fresh Start Act and the Expanded Workforce Access Act.

According to the Institute for Justice (IJ.org), Missouri’s occupational licensing laws for lower-income occupations are the 22nd most burdensome in the nation. Its laws require, on average, $179 in fees, 348 days of education and experience, and at least one exam. However, with licensing reciprocity, the barriers for re-licensing will be removed. Individuals who have a current valid license issued in another state for at least one year in good standing can apply for the Missouri license equivalent. With the St. Louis and Kansas City metropolitan areas bordering as many as eight other states, the new law could potentially pull in additional workers to drive those economic engines.

Grier sees the legislation as a way to pave a clear path for working in Missouri, especially for one distinct group — military spouses, who may only stay in a city for two or three years. Additionally, in the COVID-19 era, the law opens up an opportunity for outsourced medical professionals to quickly plugin where they are needed, he said. Grier further explained that several executive orders were passed to allow healthcare workers reciprocity during the pandemic.

The Fresh Start Act will present nonviolent, ex-offenders fewer barriers to obtaining licensure. Prior to HB 2046, an individual could be arbitrarily denied strictly because of criminal history. Under the new legislation, consideration for licensing must be given if the ex-offender has received rehabilitation and must take into account whether or not the applicant’s criminal record directly relates to the license application. The bill for ex-offenders does not provide protection in regard to teaching, medical and white-collar professional licenses.

The final initiative, the Expanded Workforce Access Act, addresses apprenticeships. Under HB 2046, on-the-job training apprenticeships count toward requirements for occupational licenses. Potentially, apprentices can obtain industry licenses through their job training. Twenty years ago, one in every 20 professionals required a license. Today, it is nearly one in four, including in traditional trades, such as plumbing and electrical work, and in technology and medical fields. According to George Mason University, following national averages, in 2015, Missouri licensed 21.3% of its workforce and certified another 5.4%. The Missouri Division of Professional Registration subjects 240 occupations to licensing, which ensures government mandated entry requirements have been met.

Grier expected to spend his entire term in the legislature working on this bill. Instead, the bill passed with broad bipartisan support and a unanimous vote. The bill was supported by the Institute for Justice, Women’s Foundation and St. Louis Regional Chamber.

“It is a privilege to pass a bill that impacts so many people,” Grier said. “This is why I went into public service.”